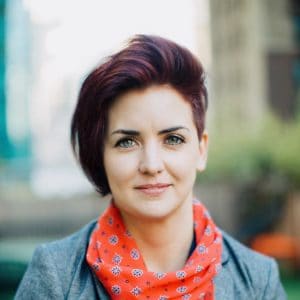 Cathryn Lavery is a serial entrepreneur and designer. As co-founder and CEO of BestSelf Co, they took the company from zero to 8-figures in less than two years. They won Shopify’s Build a Business Competition in 2016 and the Build a BIGGER Business competition in 2017 – making BestSelf Co. the only company to win both awards consecutively and ringing the NYSE opening bell twice.

As an Irish immigrant with a standing start and zero business experience, Cathryn has transformed herself into a serial entrepreneur, creating multiple brands and even helping others bring their ideas to life.

More than that, she has transformed people’s lives through her products, her dedication to crafting a memorable experience, and her refusal to accept the status quo.

Cathryn and her work have been featured in Fast Company’s 2017 Innovation by Design Awards, as well as Entrepreneur, MTV, Huffington Post, Forbes, Inc. and more.